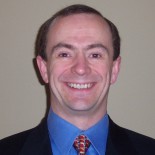 Cloud Computing: Have You Hugged a Rogue Today?

Embrace, Align, Assist, and Leverage Rogues… or Lose Them Forever 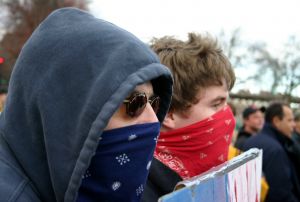 Recently I participated as a panelist in a “#CloudViews” Twitter chat regarding Rogue IT. (A full transcript is available via this link.) The session was one of the best tweet chats I have attended, with a number of very active participants from many very different backgrounds. Though rogue IT can be a very contentious topic there was agreement on a large number of items. The following is a brief summary of some of those.

There was a great deal of spirited dialog regarding the root cause of rogue IT. On this there was widespread agreement that IT’s customers believe the IT team is unwilling, or worse, unable to help them to be agile and innovative. This was not much of a surprise to the participants, even those with an IT background. Some of the key causes of rogue IT that were identified by the group included:

As frightening as this may be, without a doubt some IT departments possess many, perhaps most, of those qualities. Though in many cases these are perceptions or perhaps even fallacies. For example, though it is commonly stated that in-house solutions provide less functionality, cases of customers “going rogue” and moving to cloud solutions with less functionality are commonplace as more and more people learn the value of simplicity and “good enough”, and the agility and savings that can often accompany them. So the key message for IT teams is that whether in your case these are perceptions or reality they cannot be ignored.

If the above items are a true assessment of your team, then you have serious work to do. If they are not, you still have much to do to change those perceptions, engage your customers, help them to succeed, and then promote their success. Michael Krigsman (@mkrigsman) offered this advice:

The group next explored whether rogue IT should be embraced or exiled. On this there was also widespread, perhaps nearly unanimous, agreement that IT teams should embrace rogue IT. There were several reasons for this, as summarized by the following tweets (from me, @limbic and @jayfry3): 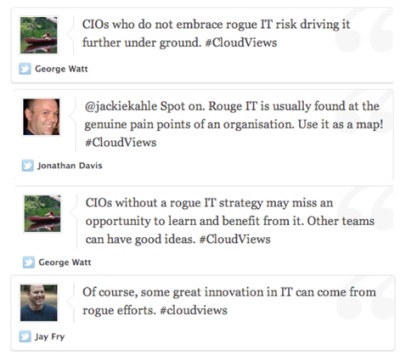 The participants saw a huge potential opportunity in embracing the rogues. It was generally agreed that much could be learned from rogues, and that they often identify substantial opportunities for the business. (I have personal experience with a project that started outside the IT group and eventually became a companywide service delivering significantly increased agility and millions in cost savings and productivity gains.)

It was also agreed that placing a bounty on rogues could drive them further under ground and that could potentially result in lost opportunity and increased risk to the company. And that led nicely to the next topic.

While the group agreed that rogue IT was potentially beneficial, the participants agreed that it was not without risk. Some of the risks the group identified were:

His suggestion that rogue IT solutions are often not included in business continuity and disaster recovery plans caught everyone’s attention and was, perhaps, a bit sobering.

The participants offered the following strategies for mitigation of rogue IT risks:

The chat concluded with a discussion of whether the benefits of rogue IT outweighed its risks. On this there were two schools of thought, though they were not necessarily in conflict with one another.

One group had the opinion that rogue IT was a great potential source of innovation. They believe that it is simply the result of people who live through the challenges and opportunities of the business every day – working to solve those problems and take advantage of those opportunities. This group offered that good ideas can come from anywhere and that IT teams need to “check their egos“. They also believed that embracing rogue IT and using it as an opportunity to engage with their customers could result in better IT-business relationships and improved business outcomes. The second group felt that rogue IT was more a symptom of a dysfunctional IT group and that that needed to be addressed.

There was general agreement that each case of rogue IT needs to be evaluated on its own merits, and that there are risks to rogue IT. Though there was also broad agreement that there was a “win-win” to be found in cases of rogue IT. The group also discussed that some rogues are realizing they are “in over their head” and coming back to IT for assistance. (Something I call the “service boomerang“.)

At the end of the discussion, Christian Reilly (@reillyusa) offered good food for thought, so I will give him “the last word”:

This article is cross-posted at Cloud Storm Chasers. Follow @GeorgeDWatt